Dancer and choreographer Jorelle Pome has taught me a lot… and not just about dance!

For one, doing what we love, pursuing our passions are much more than luxuries. They are as essential as sticking to a healthy diet, exercising and paying the bills! Two, recovering our passions after trauma takes a lot of courage, self-advocacy and willingness to put oneself out there (and yes, networking)! And not least, having someone who believes in us gives us the confidence to continue on the path.

Over this past year, I have been one of six Capital Dance Collective members. learning and rehearsing Jorelle Pome’s newest piece, “Disaster, Mayhem, Recovery, Acceptance.” This piece will be performed at the Troy Arts Center on September 28th (at Troy Night Out). In Jorelle’s words, “it is about “regaining life after something terrible happens.”

For me, it has been about dancing AND getting to know Jorelle and more deeply probing the recovery process…a wonderful opportunity for both the dancer in me and the advocate!

Jorelle earned a BFA in choreography in 2000 from Concordia University in Montreal. For five years, Jorelle was actively engaged in both choreographing and performing. Her works were presented at the Joyce SoHo, Mulberry Street Theater, the Philadelphia Fringe Festival and other venues…and filled with undulations, acrobatics, facial elements and humor. 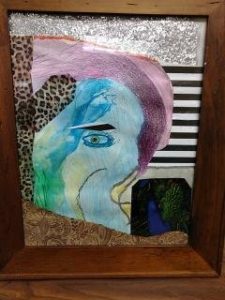 “IN LOVE,” by Jorelle Pome

Just before turning 30, Jorelle was in a car accident; she was not expected to survive. It has not been an easy path. When I brought that up to Jorelle, her response was “It’s gotten easier”…her ability to see the glass half full, loud and clear!

When I visited Jorelle at Living Resources (where she participates in their Acquired Brain Injury program three days a week), she invited me in to her art group and explained, “Creativity has poured out of me since I was a baby!”

And indeed, Jorelle showed me the collage she was working on, how she does prints and her piece titled “In Love,” recently displayed in conjunction with the College of St. Rose’s Moving Message Awareness Walk. Then we looked through Jorelle’s large portfolio of collected art materials…I found bright, bold-colored feathers, sparkles, lots of different tissue papers, a book of wallpaper and yes, lots of creative energy! 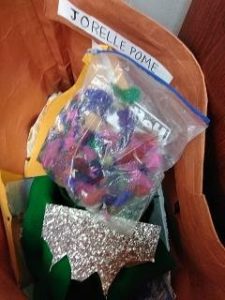 “What I love about the Living Resources program is that I get to do art and be social. Before moving up here and becoming a part of this program, I was very isolated,”  Jorelle told me.  When I asked her how she learned about this program, she explained, “I did a lot of research to find the needed resources!”

Bringing dancer/choreographer and physical therapist Diane Betts on board as her partner was the support that Jorelle needed to continue to create and showcase dance. Diane met Jorelle three years ago when she attended Jorelle’s dance performance at Casey Bernstein’s Center for NIA and Yoga. When Casey put out Jorelle’s request for a dancer who might be interested in working with her, Diane responded. (Sounds like  networking to me!)

This piece is the third dance that Jorelle has created since her accident. She is clearly a trained dancer with a strong sense of how to communicate through movement.  In our rehearsals, I have enjoyed watching Jorelle’s left arm dance with grace, control and clarity…and the way her upper body/shoulders remain erect and convey self-confidence.

Jorelle’s body however does not allow her to do what she had been able to do so freely before her accident…It would be easy for Jorelle to focus on what she is not able to do.

Instead, I have seen a woman who truly enjoys dance…and who laughs at her body’s sometimes, awkwardness.  Jorelle is also a person who often thinks of others!  When someone new joined us for a rehearsal or when I visited her art group, she made sure that everyone was introduced. And while Jorelle sought services from Living Resources, Structured Day Program Manager Laurie Bosco observes how quickly Jorelle responds when she sees a fellow program participant needing assistance.

For Jorelle recovery means continuing to bring dance to her community as well as dancing with others. It means doing her art…and APPRECIATING that which she has in her life …evident from her genuine smile for the children she passes as we leave our rehearsal space at the Y.   Or the gratitude she feels towards Diane (Betts) when she talks about Diane believing in her!

It has taken (and continues to take) a lot of asking for what she needs, taking advantage of resources and putting herself out there! The benefits are clear…both for Jorelle and all those of us who encounter Jorelle.